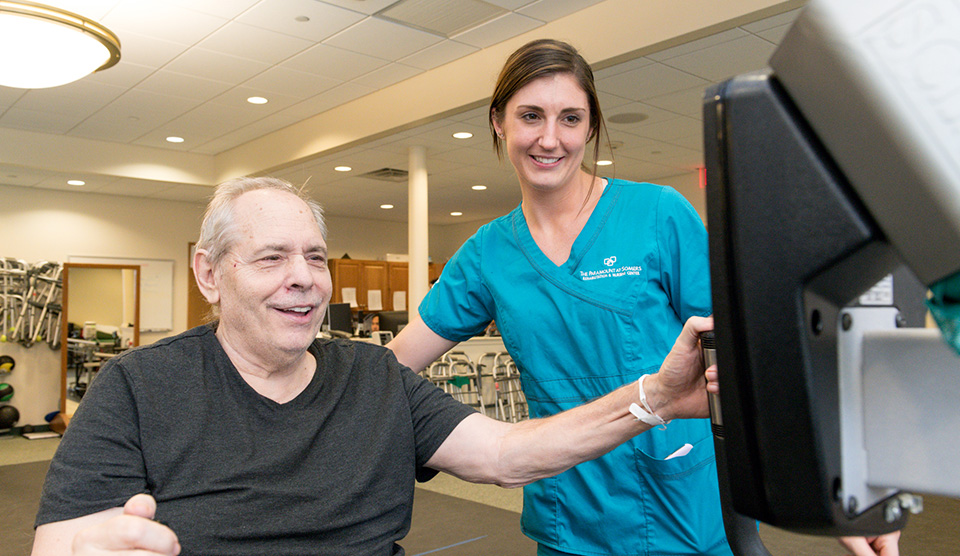 Patient’s Age: 61-years-old
Admission Date: 12/09/20
Admitted From: Hudson Valley Hospital Center
Discharge Date: 01/11/21
Length of Stay: 33 days
Discharged To: Home
Reason for Stay: Required assistance in functional mobility and ambulation due to heart failure
How did this patient hear about The Paramount at Somers? Hospital Referral

Details of Experience:
Mr. Bart is a 61 years old male patient who was admitted to The Paramount at Somers Rehabilitation and Nursing Center from the Hudson Valley Hospital Center on December 9, 2020. The patient was diagnosed with heart failure and has undergone a coronary artery bypass graft.

Prior to his admission, Bart was independent and active and lived at home with his wife and son. Upon admission, Bart presented significant bilateral lower extremities weakness. This situation required him to use a front-wheeled walker, to allow him to walk safely with occasional physical assistance (contact guard assist) when he would lose his balance. Additionally, Bart showed a low tolerance to standing, which was highlighted by his oxygen level, easily desaturating below 90%, while doing self-care routine tasks such as washing his face or putting on his clothes. Bart’s compromised cardiopulmonary function necessitated the use of supplemental oxygen via nasal cannula to help him perform his daily routines. Due to the shortness of breath, Bart was apprehensive of walking, which also intensified his concerns of meeting his self-care needs when he was discharged back home.

After being admitted at The Paramount, Bart was introduced to his physical therapist Winston Loza and occupational therapist Rhea Catubig. Both therapists soon realized they were facing an additional challenge. Bart had a previous disappointing experience with physical therapy at home. He had developed a high sense of skepticism about therapy services. He expressed his concerns that his exercises were not challenging enough to optimize his recovery. His therapists addressed Bart’s skepticism by proactively involving him in the decision-making process and the development of his goals in physical therapy. The new goals were now focused on regaining his ability to walk again, without an assistive device and without the need for supplemental oxygen. Additionally, he aimed to walk up and down the 14-step staircase at home with improved balance and endurance.

Bart’s plan of care at The Paramount at Somers consisted of progressive strengthening exercises of his core musculature and lower extremities. This plan focused on using resistance bands and weights that increased the muscular strength, which addressed the buckling of his knees, mediolateral instability, and improper sequencing of his gait – particularly when he was occasionally dragging his feet when ambulating. The improved strength also allowed him to get up from different surfaces, such as bed and low or high rise chair.

As a result, Bart improved endurance and the use of energy conservation techniques that he achieved during his physical rehabilitation sessions, he no longer needed supplemental oxygen. Bart’s oxygen level remained above 92% even during activities, even when ambulating for more than 175 feet. He also regained his confidence and independence when doing challenging tasks, including navigating 15 steps (an equivalent of 2 flights of stairs) even without holding on to a handrail – another positive sign of his improved balance and significantly reduces the risk of falling. During the course of his physical rehabilitation, the therapists, in collaboration with Nurses and Social Worker, communicated closely with Bart’s son and wife to keep them up to date with his progress and educated them on how to continue the plan of care even at home and to continue to encourage Mr. Sangiuolo to remain active, especially to ambulate regularly.

Bart had strong family support. While Bart’s focus was rehab, he enjoyed watching TV in his room and receiving 1:1 visits by the concierge, as well as the amenities we offered. The Activities department provided him with a Table Top activity packet, along with some magazines to enjoy at his leisure.

On January 11th, Bart was discharged back to his home with the regained level of independence, improved ability to walk without any assistive device, with no longer need for supplemental oxygen, improved balance to reduce risk of falling and being able to do all his daily tasks by himself. Bart was excited to go home and kept telling his physical therapist that he couldn’t wait to get back to his fitness gym to continue his dedication to improving his health further.

Bart shared with the concierge how happy he was during his stay from the day he came into the day he discharged home. He could not express enough how grateful he was for the great PT and OT therapists and the staff here at The Paramount. His words, “they were incredible, great instructors and very professional”
You did it, Mr. Sangiuolo! We are very happy here at The Paramount at Somers to be instrumental to your recovery.

The Paramount wishes him all the best!